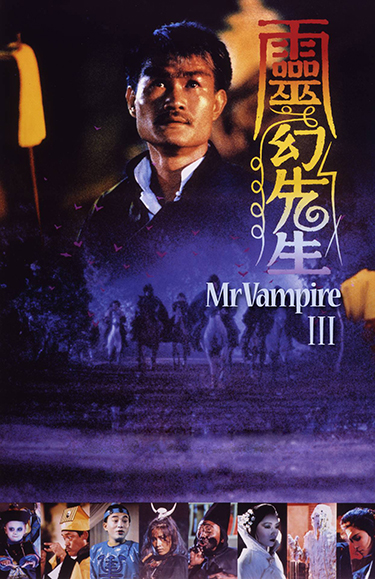 The first to come to town is the Gang, headed by the witch. The Gang is ambused, resulting in the dead of 5 girls and the capture of two robbers. The next to come to town is the Taoist Conman with his ghost of a cousin, The Imp. The police chief orders him out. As there is a reward over the robbers' head, the conamn tries to kidnap them but is failed. The police chief has a rough time with the Imp. So he asks his teacher the Priest for help. The Priest imprisons the Imp but release him later. The chief chases the Imp who somehow gets into the corpse of a Gang girl. The Witch joins the chase. The Priest has to imprison the Imp in thr gourd again.The Taoist Conman saves the Imp and goes to get the two robbers. The police come. In the melee, the robbers are killed and the Witch defeated. The police deputy, however, rapes the Witch and kills her.

At the celebrating dinner, the robbers turn the two morticians into vampires and work s havoc. The Priest tames the vampires. The deputy tries to use magic to imprison the spirit of thw Witch bit is killed. The Witch vampire goes for the Conman and the chief. The Imp leads the Priest to their rescue, barely in time.