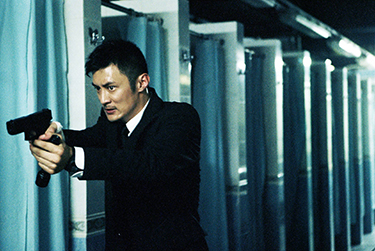 Every day, the Police Force receives 185 phone calls. 180 of them are about burglaries, murders, rapes and kidnappings. The remaining 5 begin with: “There is something strange in my house, can you please send someone over to take a look?”

For rookie Sergeant Lee (Shawn Yue), being a cop means running down crooks and upholding the law. Injured in a shoot-out, he finds out to his horror that he is reassigned to the dubious-sounding Miscellaneous Affairs Department (MAD).

There, he is paired up with Inspector Wong (Ekin Cheng), a jaded and alcoholic veteran who explains that MAD’s role is to answer supernatural calls.

A swimming pool caretaker calls the Police about strange noises at his workplace. Lee and Wong are dispatched to the scene. Lee seems to be on the brink of uncovering something sinister when Wong traces the source of the ghastly noise – a clogged-up water pump.

Putting Lee down, Wong explains MAD’s rule number one – There are no ghosts.

For every seemingly-inexplicable phenomenon, there is a corresponding scientific and rational explanation.

When Lee and Wong arrive at a nursing home to investigate a bizarre TV that keeps turning itself on and off, the veteran cop immediately uncovers the culprit. A man in the opposite apartment is channel-surfing with a remote control that is of the same brand as the TV in the nursing home.

Unconvinced by Wong’s easy explanations, Lee investigates on his own and finds himself confronted by the impossible. At the swimming pool, he is haunted by the ghost of a young girl who had drowned there. At the nursing home, he encounters the spirit of an old woman who enjoyed watching TV before she passed away.

Confronted by Lee, Wong reveals the true mission of MAD. When members of the public call the Police about strange noises or ghostly shadows, MAD shows up and reassures the complainants with scientific and rational explanations. The truth must never be known or else society will descend into chaos.

A firm believer of truth and justice, Lee cannot reconcile himself to MAD’s shady practices. As he rebels against the system, the young cop slowly realizes that there is a grain of truth in Wong’s advice.